'When emotionally fragile Fleur Curwen decides she wants excitement in her boring life she signs up for a Murder Mystery Weekend in the wilds of the English Lake District. She enters a paranormal world where danger and death are common occurrences.

Demon slayer Lukas Draco is a loner. He lives by two simple rules: No emotional entanglements and duty must remain his first priority. His beliefs are challenged when he's inexplicably drawn to Fleur, a human woman with an unusual psychic aura. Sparks of sexual attraction ignite threatening both his search for the dragon's egg he buried a thousand years ago and Fleur's life.

About the Author:
As a child I had a complete stable of make believe horses and my imagination remains as vivid. Now it creates characters and scenarios which provide the inspiration for my stories. 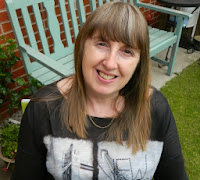 I am so excited to finally have career as a writer. My love affair with the written word started as a teenager. I secretly dreamed of writing the romantic novels I loved to read. Life had other plans for me. Marriage at twenty-one whilst still at university launched me into a career in health service management. I often thought about writing in my spare time but my career and two wonderful children kept me occupied 24/7.  Illness forced an abrupt end to my career. Always the optimist I seized the opportunity to write full time in 2012.
The Dragon Legacy is my first published novel and I am excited to be sharing it with a wider audience.
When I'm not writing I enjoy reading, book reviewing, social media and walking in the countryside. Passionate about animal welfare.

An Excerpt from The Dragon Legacy:


Fleur stole a sideways glance at Lukas as he conversed with Jasmine. His impressive physique exuded an aura of power personified by a fit, muscular body and long, lean limbs. Filled with suppressed sexual excitement, she half closed her eyelids, leaned back against the headrest, and continued her secret study of him. His face was the epitome of masculine beauty, characterized by well-defined angular cheekbones, covered with pale, almost translucent skin. Its apparent delicacy did not detract from his masculinity; he looked like a fallen angel. A tell-tale blush stained her cheeks rosy. A rush of heat pooled between her legs. Fleur shuddered. Shocked at her impulsiveness, she sat on her hands and admired the sleekness of his fashionable long, straight hair, which looked like silk. Neediness overpowered her cautious nature as her gaze feasted on its remarkable black color, reminiscent of an exotic bird or reptile with highlights of metallic turquoise and blue woven through it. Fleur stole another glance at Lukas from under her lashes. He stared back. Horrified, she blushed unable to avoid his inquisitive gaze. She waited for the smug look or the double entendre. Lukas’ smile hid a myriad of emotions. The fire in his heated look betrayed him, luminescent and golden, in stark contrast with the dying afternoon light.


͌
Lukas slanted a glance at Fleur. The look of rapt absorption on her face stilled his breath. She looked at him hungrily, as if he was a delicacy she would love to taste. His blood echoed in his head as it thundered through his arteries. Arousal exploded in every inch of his body, highlighted by the uncomfortable tightness of his designer jeans, a testimony to his body's readiness to act. He stopped talking in mid-sentence. Jasmine looked at him through the rear view mirror. His body leaned into Fleur's, attuned to her hot gaze's invitation. No. He couldn't, not here or anywhere, with her. Lukas sensed the exact moment Fleur noticed him. He disguised all signs of his arousal. He hoped his expression revealed none of his inner turmoil.


The truck turned into a concealed driveway. Calmer, he resumed his light conversation with Jasmine, who didn't remark on his recent distraction. Fleur stared through the window. Moments later, the truck stopped with a shudder. Lukas smiled at her hasty retreat. He sighed as the truck door shut behind her. His lack of control bothered him. His mission needed all his attention. A dalliance with a pretty human was not on his agenda. It would jeopardize the dragon egg's safety.


Jasmine walked around the truck for their luggage. The grey, windswept house stood hidden among the hills. Paint peeled from the window frames and moss grew along the grey stone walls. A wave of coldness swept through Fleur. She shuddered. “It’s so atmospheric, perfect for a murder mystery.” She looked across at Lukas. He seemed preoccupied. A woman appeared at the house's front door. Lukas' face lost its shuttered look. He smiled.


“It’s lovely to meet you too,” Fleur smiled at the older woman, reassured by her kind smile.


Lukas shook Grace’s hand. Her gaze widened as their physic auras merged. Lukas controlled his response; his face remained devoid of expression. Jasmine frowned and touched her mother's shoulder. With one last puzzled look at Lukas, she said,


“I’ll show you to your rooms. Afternoon tea is at three. The conservatory is at the back. You'll have an opportunity to meet the other guests there.”


Lukas smiled. He sensed her interest and strength. They'd met once, years before. She owed him, and he needed her help now.
͌
Fleur unpacked her bags in her shabby-chic room. Her mind strayed to Lukas' surprising effect on her. Vivid recollections of his strong embrace and the hardness of his muscular body bombarded her. She splashed cold water on her face in an attempt to cool the burn from her inner heat. Why did she crave this man's touch? Intimate images danced through her confused mind. She sprayed perfume on her heated skin. Nothing in her life prepared her for this tangle of conflicted emotions.


Perhaps she'd hidden away too long? She needed excitement. Her ex-lover didn't understand her grief after the premature deaths of her much-loved parents. Instead, he chipped away at her self-esteem. Lukas saw through her layers of self-protection. He noticed her. The heat in his stare scorched her deep inside. She needed this man. She blushed at her wickedness. The alarm on her mobile sounded, almost three; time to go. She took a deep breath, determined to dampen her aroused state. With a final check of her appearance, she retrieved her bag and headed downstairs.


Fleur stood inside the conservatory until her eyes adjusted for the brightness. She walked further into the room and scanned the occupants for Lukas, but he wasn't there. Disappointed, Fleur looked around the room. Jasmine's companions drew her gaze. Something set the unusual men apart from the other people there. She saw a familiar face. Grace was deep in conversation with two of the older guests. She looked busy, so Fleur didn't disturb her.

The designer-clad men recaptured her interest. The dark-haired man appeared fascinated with Jasmine. His face darkened as Jasmine interrupted his diatribe.


"You'll have to excuse me. I need to welcome Fleur."


Jasmine headed in her direction. Without Jasmine’s vivacity, the conversation between the two high-powered men lapsed into silence. The younger man looked bored and distracted. The delicate rose- patterned china tea cup appeared awkward in his large strong-boned hands. He ran his long fingers through his shaggy, platinum blond, almost silver, hair. It masked the paleness of his silver-colored eyes. He looked handsome. Fleur waited to see if her heart flipped. It didn't. Her stomach lurched at the implications of her discovery. Her attraction to Lukas was based on something deeper than eye candy.
Copyright © 2013 by Crimson Frost Books and Jane Hunt
My Review:

I enjoyed this story. It provided some twists and turns which I didn’t see coming. The setting in the English Lake District immediately drew my attention, and so did the premise of a group of strangers meeting for a Murder Mystery Weekend.

I don’t want to give away any spoilers, but this Murder Mystery Weekend is not at all what I – or the main character, Fleur – expected. Not at all!

Fleur’s unusual meeting with Lukas Drako leaves an indelible impression on the somewhat naive Fleur. She can’t get the image of the handsome stranger out of her mind. The chemistry sizzles between them, but Lukas has to avoid getting emotionally entangled at any cost. His mission is crucial. Life and death. No way does he want to be distracted by this gorgeous, innocent, and shy young woman.

But their attraction for each other is just too much. Fleur sheds her innocence in heated – no, sizzling – encounters with Lukas, and she doesn’t mess around in letting him know that she desires him.

Then, along comes the villain – Xavier – who threatens not only the relationship between Fleur and Lukas, but also the future of Lukas’s world.

There are some very interesting supporting characters in this book, and I could see them each starring in a future book. They have interesting stories to be told.

Overall, I enjoyed this interesting story but think that it could have benefitted from a tighter edit in some places.


Join Jane on her blog tour - Giveaways to be won!