The Call of the Bush

Join in the Book'd Out 2014 Australia Day Book Giveaway and Blog Hop - Visit the other blogs. Lots of fun and giveaways - click HERE

In the mid 1960’s, when I was in primary school, I was given a fourth-hand book called The Call of the Gums. It had a beautiful sketch on the cover.  Graceful gums, their branches casting a dappled shadow over the ground, seemed to sway in the breeze as I gazed at it. I loved that picture – and I loved that book. So much so, that I still have a copy. Inside the cover are the names of my cousins and older sisters who also owned the book before me, each one crossed out and the new owner’s name proudly written in a childish scrawl.


From this anthology of Australian verse, I learned to recite, by heart, poems that I still remember. The Call of the Gums introduced me to Australian poets such as Kenneth Slessor, Henry Lawson, Judith Wright, and local Aboriginal poet, Kath Walker – who changed her name to Oodgeroo Noonuccal in 1988. The anthology also gave me a sense of what it meant to be Australian. Kenneth Slessor’s Beach Burial never failed to make my eyes sting with tears; I learned about war, about droughts, about dogs dying, and I learned a deep love for the Australian bush which has lasted a lifetime.


More than 50 years since The Call of the Gums was first published, I can say that, thanks to the words and imagery contained within its covers, I have enjoyed a life-long love affair with the bush. Nothing makes my heart sing as much as being in the heartland of Australia – the bush. It’s where my senses soar; it’s where a spirituality enters my sometimes hardened respect for religion; and it’s where I’m filled with peace and wonder at its beauty.


Some of you may know that I have written a number of songs over the years. Most have themes inspired by being in the Outback – the country – the bush. But there’s one song I’d like to share with you this Australia Day. It’s called The Bush Church, and it fairly well sums up my feelings. 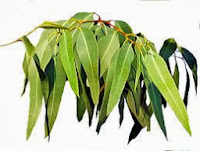 And a hollowed out old tree stump tells His news.

I look about me at the congregation gathered round
Their peaceful faces show no signs of care
For the faces that surround me are the creatures of the bush
All the animals whom God has made are there.

No bricks and mortar, glass and walls, could ever be this good
The glory of God’s work is at hand
The lofty ceiling echoes as no real church ever could
And my bush church makes me feel as no place can.

A choir starts to sing a song of praise to God on high
No chorus ever sounded quite so sweet
The bird song of the Aussie bush, God’s creatures one and all
And now this bush cathedral is complete.

No bricks and mortar, glass and walls, could ever be this good

The glory of God’s work is at hand
The lofty ceiling echoes as no real church ever could
And my bush church makes me feel as no place can.

No bricks and mortar, glass and walls, could ever be this good
The glory of God’s work is at hand
The lofty ceiling echoes as no real church ever could
And my bush church makes me feel as no place can.

Here’s my ‘bush’ version of The Bush Church 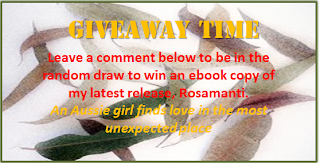 That's right. Just leave a comment below to be in the random draw to win an ebook copy of my latest release, Rosamanti.
An Aussie girl finds love in the most unexpected place

Entries are now closed. Thank you to all who entered.

The winner is Faith Hope Cherrytea.
Thanks to Book'd Out for hosting the great 2014 Australia Day Blog Hop & Giveaway. 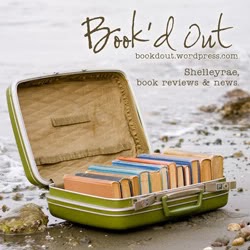 Email ThisBlogThis!Share to TwitterShare to FacebookShare to Pinterest
Labels: 2014, Australia Day, Book Tour, Book'd Out, giveaway, Rosamanti, Shellyrae, The Bush Church, The Call of the Gums