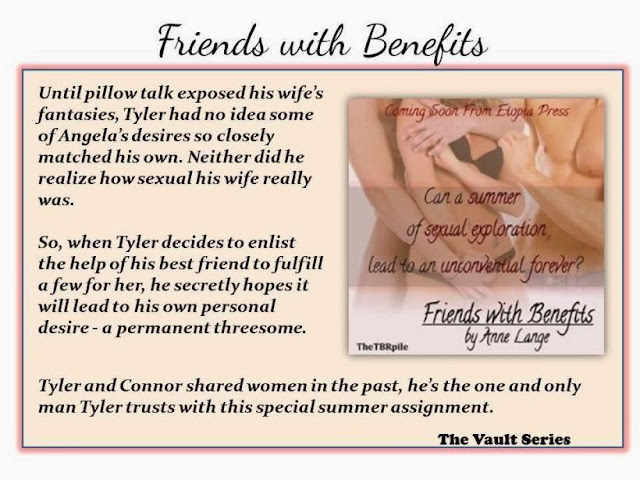 Can a summer of sexual exploration, lead to an unconventional forever. 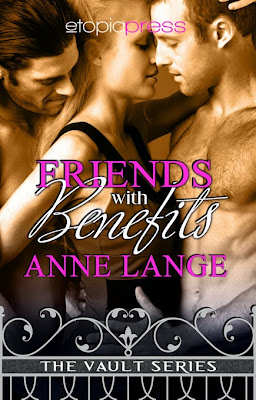 Connor Jones
Connor can’t believe it when he best friend asks if he would consider seducing his wife. Then he meets Angela, and all the women in his past fade away. With his friend’s blessing he sets out to seduce the man’s wife. And when Tyler joins the party, the three of them set the sheets on fire. Angela is one sexy woman, and Tyler is one lucky man. If only Connor could find a woman like her, one who would love him unconditionally.

Oh Anne, this books sounds H.O.T! And intriguing! I'd love to know a bit more about you and your writing.
This book, Friends with Benefits, is the first in the Vault Series. What can readers expect from Book 2 in the series?

Well, let’s see.  There will be some dancing, some hot looks and sweet kisses, some laughter and some sex, lots of sex.  Oh, and some spanking and some handcuffs, and perhaps a visit, or three, to The Vault.

Yes, it’s my first ménage book, but it won’t be my last.   But more importantly, this happens to be the very first story I wrote.  Funny, when I started writing, oh about four years ago, I just went straight to a ménage.  I read a lot of ménage stories, so perhaps that’s the reason why.  But honestly, the first draft of this story came pretty easily.  It has changed quite a bit since then, but the underlying characters and the essence is still the same.  This was my first writing baby.  Now I get to see her fly!

How do you juggle full time work, a family, husband, home - and write. Do you set aside writing time then stick to it no matter what?

LOL! HAHAHAHA.  Sorry.  Um.  No.  I would seem I suck at juggling and commitments.  (And if you knew about my day job, that would make you laugh, too).  I try to set aside specific writing times, but I’m not very good at sticking to them—I get caught up in all the other stuff (email, blogging, promo).  The only time I’ve been able to do it is during NaNo.  This year, one of my goals is to write 1200 words five days per week.  I say five because Tuesday is NCIS night. No writing happens then.  And Saturday is the day I try to set up my posts for the following week.

Which of the two male characters in Friends with Benefits is your favourite, and why?

You know, I almost corrected your spelling of favourite.  That’s how we spell it in Canada, but since I’ve been writing, I always have to remove my “u’s” so, I almost did.   LOL!
Back to the question.  Connor of course.  He looks like the bad boy, but he’s a sweetheart.  All he really wants is what his best friend has—a woman who loves him, unconditionally. 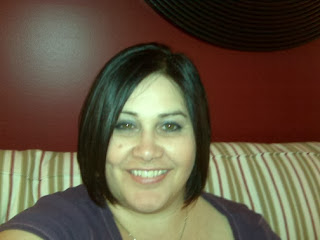 Who is Anne Lange?
Anne Lange grew up with a love of reading. In fact, if you take a close look, she’s got either a book, her Kindle or her Kobo with her where ever she goes, and will usually sneak in at least a chapter or ten whenever she can spare a few minutes. She reads many genres of fiction, but prefers to write sexy romance with attractive men, strong females, and always a happily ever after.
While embarking on a career as a romance author, Anne juggles a full time job and a family. She grew up in Southern Ontario (Canada), but now makes her home in Eastern Ontario where she lives with her husband and three children, and Rocky the bearded dragon.

Buy your copy of Friends With Benefits HERE!

Watch the video trailer for Friends with Benefits:


Anne, it's been an absolute pleasure to have you visit my blog. Please come again soon, and congratulations on your release on January 17th.

To celebrate the release of Friends with Benefits, Anne is holding a massive giveaway! Just look at this beautiful bundle of bounteous gifts - all to be given away to those who enter the competition via the rafflecopter link below. Entries accepted from Jan 4th until January 20th at midnight. 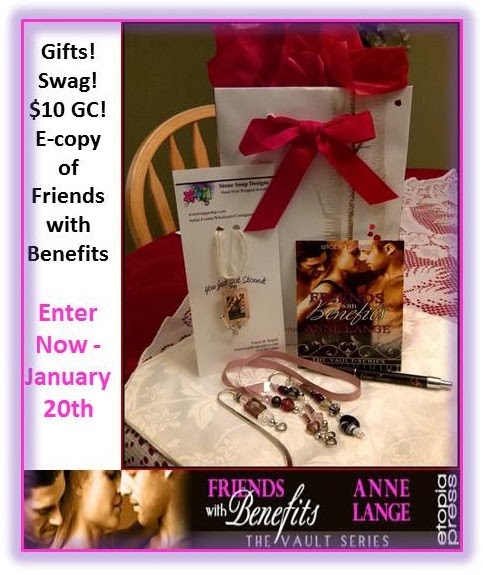 Connect with the Author

Email ThisBlogThis!Share to TwitterShare to FacebookShare to Pinterest
Labels: Anne Lange, Etopia Press, Friends with Benefits, The Vault Series, Worth the Risk