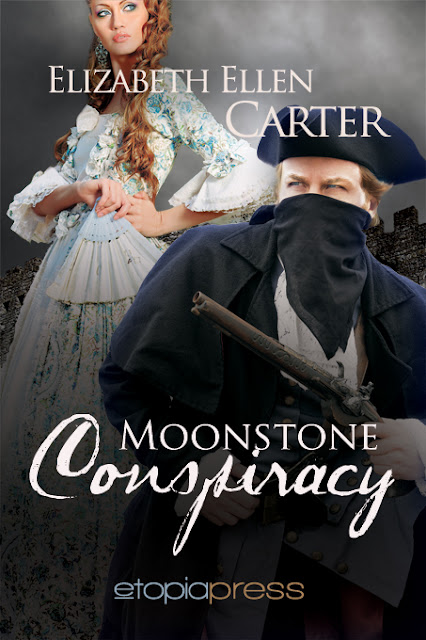 
Q. Firstly, congratulations on the release of Moonstone Conspiracy, the sequel to your first book, Moonstone Obsession. The first was set in 1077 – how much later is Moonstone Conspiracy set?
Moonstone Conspiracy is set two years later in 1972-1793 and things are very much different. The glorious French Revolution which was supposed to bring reason, progress and secular enlightenment has descended into a bloody madness history would call the Reign of Terror. England still remains on a knife edge still economically weakened but facing peril inside its borders too.

Q. What specific research did you do for this time in history?
In some respects it was a continuation of the research for Moonstone Obsession. When James and Selina got to Paris at the end of 1790 they were there with England’s Ambassador, Earl Gower. By the end of 1792, most likely following the arrest of Louis XVI, England closed its Embassy.

What amazed me was the speed of the descent into murderous, blood-thirsty anarchy.
What was also interesting is that the National Assembly of France didn’t technically declare war on England in early 1793, they declared war on George III.


They had hoped that Radical elements in Britain would rise up against the Crown and would join a world-wide revolutionary movement.

Q. How important to you is to have the setting, era, and speech perfectly suited to the time the book is set?
I think there has to be a balance with dialogue because you’re writing for modern audiences. Today conversation is a lot less wordy, a lot less flowery. It’s important to be mindful to avoid glaring anachronisms and I found myself doing a lot of research into lots of different areas including boxing, types of carriages – even how sugar was prepared for the table. There are a lot of Regency and Georgian enthusiasts among readers who are sure to pick up on any inconsistencies

Q. Is there any link between the names you’ve chosen for your leading characters, and people from real history?
I have included mention of a number real life historical figures, Louis XVI and Marie Antoinette, George III and William Pitt the Younger – of course, but there is also reference to the boxer Daniel Mendoza, the French doctor Philippe Pinel, Robespierre, Lord Mansfield... To me a historical romance doesn’t feel authentic if there is no reference to news, events, people and issues of the time. We don’t live in a vacuum, the times in which we live influence our views. So it is important for me to represent the characters as real people engaged with their time.

Q. Will readers warm to Lady Abigail Houghall straight away, or warm to her as the book progresses?
I think readers will understand Abigail very quickly even if they don’t condone her past. At the beginning of Moonstone Conspiracy, we see Abigail emerging from a very dark place.


The events at Bocconoc House two years earlier left her uncertain and broken – two things Abigail has never been in her life but now she’s picking up the pieces of her life the best way she knows how.

Q. Daniel Ridgeway is a man with his own past and problems. What is it about him that attracts Lady Abigail?
Daniel is the first man who has ever seen Abigail for herself. He knows of her past and doesn’t hold it against her. In many respects he brings out her better nature and encourages it.


Mind you Daniel’s past has scarred him. He holds himself responsible for a tragic death and that has coloured his approach to love and relationships.

Q. What can readers expect from your current works in progress?
I’m working on two very different stories at the moment. I’m just about to wrap up a short story called September Harvest set in the late 19th century which has a little bit of a Thomas Hardy feel to it and my next major work is called Dark Heart which is set in 3rd Century AD Rome just as the Empire is in its death throes.

What appeals to me about that is I can’t recall another novel set during the time of the Barracks Emperors – everything I’ve read so far centres on the Golden Age of the Julio-Claudian dynasty.


I see a lot of parallels between that period of history and today.

I don’t have any plans for a direct sequel to Warrior’s Surrender but I do have some very exciting plans for a new Medieval series set around Yorkshire in the early 13th century.


I’ll be co-writing them with my husband. They’ll be a blend of  history, action, mystery and, of course romance.

What would you gamble for love?
For her unwitting but eager participation in helping her corrupt cousin rob the Exchequer, Lady Abigail Houghall – a scandalous star of the London Beau Monde – has spent the last two years enduring the relative drudgery of life in the town of Bath. Under threat of transportation to the Colonies for her sins, Lady Abigail is forced to live with a maiden aunt and pen nonsensical weekly letters detailing the town’s social activities to mysterious ‘Aunt Druscilla’ in London.
As she plots to escape both her gilded cage and the stifling convention of an England that casts her as wicked, Abigail is awoken abruptly by the Honourable – and handsome – Daniel Ridgeway to the clandestine role she has been playing unawares and the price she may yet have to pay for her freedom.Daniel is a man with his own past and problems – an estranged family, a missing friend, an old flame and a mission to thwart those who would export France’s bloody revolution to England.
As Abigail is drawn deeper into his dangerous world, she realises she is falling in love for the first time, comprehending a world beyond her own self-interest, and must decide between the life she knew and the life she might have – if they survive.
From Bath’s lush Assembly Rooms to the seedy backstreets of London and the claustrophobic catacombs of revolutionary Paris, the sequel to Moonstone Obsession weaves a story of rejection, romance and redemption where the stakes are life itself.

“I’m glad you remembered our appointment.”

Abigail recognised the droll voice and so did not even bother opening her eyes.

“It’s not yet midnight,” she replied and felt the couch shift as Daniel’s weight settled down into it.

“In our business, we take opportunities whenever they occur.”

Abigail opened her eyes and opened her fan to hide a yawn. He did not look fatigued. If one was to assign his expression right now, she would have described him as being studiously nonchalant.

“And what business are we in, Mr Ridgeway?”

“A very dangerous one.”

“I don’t recall signing up for a dangerous business,” she retorted, keeping her voice low to prevent anyone overhearing. “If my experience of your business over the past two years is any guide, stultifying boredom would be a better description.

“You can tell Aunt Druscilla that my obligation to her is complete. I’m going abroad at the end of this season.”

A slow feline grin spread across his face.

Fatigue fled and Abigail straightened in her seat, ready to rise to the challenge.

“Are you going to stop me?”

“I don’t particularly care what you do after this season,” he told her. “If you can’t give me what I want by the end of June, then you’re not half the woman Blakeney thinks you are.” 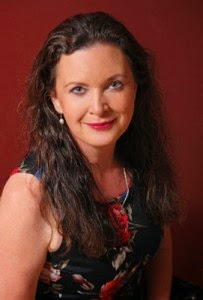 Elizabeth  Ellen Carter’s debut novel, Moonstone Obsession, was published in 2013 by Etopia Press. Earlier that year, the Regency adventure romance had been shortlisted in the Romance Writers of Australia Emerald Awards for Best Unpublished Manuscript. Set in England and France during the French Revolution, it was heralded as ‘edge-of-seat adventure and intrigue’ and ‘a rollercoaster of love, blackmail, ill-gotten gains, treason and trickery’ with Carter described as ‘a writer worth keeping an eye on’ with ‘a hint of classic suspense novelist Daphne du Maurier’.

Her second novel, Warrior’s Surrender, was published by Etopia the following year. Set in Northumbria in 1077, it sets the relationship between a displaced Saxon noblewoman and a Norman baron against the turbulent backdrop of England in the years following the Norman invasion of 1066. Reviewers found the novel ‘a fast moving and passionate read’ with ‘strong characters, an intriguing plot, and plenty of action… a sexy romance to be savoured’. Readers agreed, voting Warrior’s Surrender Favourite Historical Fiction in the 2015 Readers & Writers Down Under Readers Choice Awards. 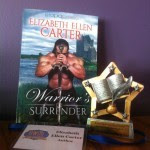 Also in 2014, the short story Moonstone Promise, spinning off from Moonstone Obsession as part of Etopia’s Valentines Heat anthology, followed the fortunes of one of the supporting characters back home to 18th century Pittsburgh in a tale of ‘second chance romance’.

Carter moved up to 1802 for the light-hearted romantic short story Three Ships, part of the Christmas 2014 anthology A Season To Remember, and ventures briefly into contemporary romance for the first time with her Romance Writers of Australia annual Little Gems competition placegetter, The Tin Bear, publishing in August 2015.

And another Moonstone Obsession character, the sinful Lady Abigail Houghall, features in the full length novel Moonstone Conspiracy, coming from Etopia Press in 2015.

Carter is currently working on her fourth novel, set in ancient Rome and tentatively titled Dark Heart, which will bring together the elements for which she has become known in just a few years – in-depth historical detail woven through gripping adventure and captivating romance.

The author lives in Australia with her husband and two cats. A former newspaper journalist, she ran an award-winning PR agency for 12 years.