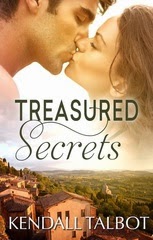 Some secrets should remain hidden forever...

The last place Rosalina expected the clue to a 700-year-old mystery to lead her was back into the arms
of Archer, the man who broke her heart. When neither can solve the puzzle without the other, they set off on a new adventure. They’re forced to ignore the sparks that still fly unhindered between them as their search for the golden riches weaves from Tuscany’s underbelly to Archer’s luxurious yacht in the Greek Islands.

Archer desperately wants to salvage his shattered relationship with Rosalina but fighting for her love soon takes a back seat to fighting for their lives. Ruthless competition is hot on their heels and will do anything to get his hands on the treasure. Murder is just the beginning. With evil close on their tail, and Archer wrestling with the remnants of a childhood tragedy, Rosalina begins to wonder if some secrets were never meant to be revealed.

Tell us about your heroine:

Rosalina is a strong Italian woman in her late 20’s. She’s adventurous, independent and occasionally likes to get up to a little mischief. She grew up in a 700 year of villa in Tuscany and her Nonna raised her in what she called, ‘Her kitchen of life’. Rosalina is a fabulous chef and she has a genuine appreciation for food and flavour and has always believed food solved everything. One of the fun things I did while writing this book, was to cook all the meals that Rosalina makes in Treasured Secrets and book two in this series, Treasured Lies. So now, Rosalina’s recipes debut in their own cookbook “Rosalina’s Treasured Treats” so maybe you can cook along as you read the book. Rosalina’s Treasured Treats is only $1.99 on my website: http://www.kendalltalbot.com.au

Tell us about your hero:

Archer is an Australian man in his early 30’s. He’s wealthy, feisty, courageous and impulsive and he’s handsome in a rugged outdoorsy way. He thrives on adventure and treasured hunting is his chosen profession. But a shocking childhood tragedy has him screaming awake almost every night. He believes the nightmares are fitting punishment and a burden that only he should suffer.

You’ve traveled extensively and are up for adventure yourself! What locations have inspired you the most as a writer?

My stories are as much about the location as the thrill of the adventures I’ve done. For example Treasured Secrets is inspired by a couple of wonderful tours we did in Florence and a cruise I did around the Greek Islands. But the scuba diving in my story comes from a diving holiday we did at the Solomon Islands. The shark scenes come from scuba diving at Christmas Island. There are several scenes in Treasured Secrets that were inspired by the Underground Tour we did in Seattle, USA. The helicopter scenes come from my visit to the Grand Canyon. There’s a plot theme in Treasured Lies, book two in this series, that comes from a deserted beach we went to in Brazil. Much of my inspiration for my debut novel, Lost in Kakadu, came from hiking in the Milford Track in New Zealand. I already have plans to use places I visited in Brazil, Egypt and Russia in my future books. I live to travel and I always have a holiday on the horizon. My next trip is to Mexico, New York and Las Vegas… bring it on.

What are you working on now? Any new books on the horizon?

Book two in this series, Treasured Lies will be out in October 2015 and book three, Treasured Love, will be released April 2016.

I used to daydream about robbing a bank that I worked at in 1992. So guess what? I robbed that bank. In a book of course. Double Take my first crime novel, is a gritty Quinten Tarantino meets Nora Roberts story set in that bank I worked in. I also chose 1992 as the year its set, a time before the internet, mobile phones and electric windows. It was also a time of Cheers, Cagney and Lacey, boom boxes and Carrington Blush fake champagne. It was so much fun writing in that era.

Tell us about the cookbook:

What advice would you offer aspiring writers?

Turn off the television. If you need to watch television, watch a movie and analyze it until you work out what works and what doesn’t. Keep an eye out for the pivotal points and really study the dialogue as this will help you improve your voice. By the way, I do most of my movie watching in my home gym, that way I get to exercise and study at the same time. 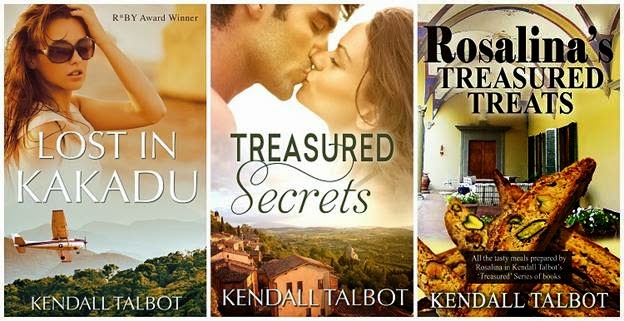 Kendall Talbot is an award winning author, thrill seeker and a hopeless romantic. She has
travelled extensively, some 36 countries, and counting and she’s addicted to experiences that
make her scream… white water rafting, scuba diving with sharks and hang gliding are just a few.

Her stories reflect her sense of adventure and her long running love affair with her very own
hero.

Kendall collects junky jewellery and expensive perfume, her favourite night out is with great
friends and a fabulous bottle of wine or two, and she rarely watches TV. She lives in Brisbane

with her hubby, her two grown boys and her little dog, Josie McLuvin.

Her debut novel Lost in Kakadu (Escape Publishing, 2013) has received a clutch of award nominations and most notably won the exclusive Romantic Book of the Year.

from Treasured Secrets by Kendall Talbot

‘I’m not going to sit here and do nothing.’ As much as the thought of running into that creepy guy in the robe scared the hell out of her, Rosalina was compelled to walk towards a dim light beckoning in the distance. Alessandro kept talking to her on the phone, but she ignored him. Soon she heard Archer and Alessandro arguing. ‘Hey, fellas,’ she whispered into her mobile. ‘Will you keep it down? I’m trying to sneak around here.’

The voices on the end of the phone quietened down.

She arrived at a set of stairs. It was decision time. Go down or go back. The nerves tightened in her stomach as she realised it was pointless to go back. Without a way to open that door, it was up to her to find her own way out.

‘I’m going down some stairs,’ she whispered into the phone. The uneven stones had a smooth path worn down the middle. At the bottom she had a choice of left or right. There was nothing to indicate which way was best. She swallowed the lump in her throat and chose left.

The stone tunnels were clearly man-made. Sandstone blocks, fashioned into giant bricks, made up the walls. There were no windows. No doors. And nothing to indicate she was heading the right way. It was silent, too. Eerie, vacant silence. Something she wasn’t used to.

The word dungeon rolled around her mind as she tried to memorise where she was going, but each twist and turn of the labyrinth looked identical to the one before: nothing but cold stone walls burdened with centuries of grime. It didn’t help that the wrought-iron lamps with the bare, dangling light bulbs hung off the walls at random intervals, creating alternating dark and light shadows.

A hand darted from the darkness and latched onto her wrist. She spun around, gasping. The dark shadows made it impossible to see who had hold of her. But she smelt him, and that left no doubt about whom he was.

Rosalina forced the putrid odour into her lungs and screamed.