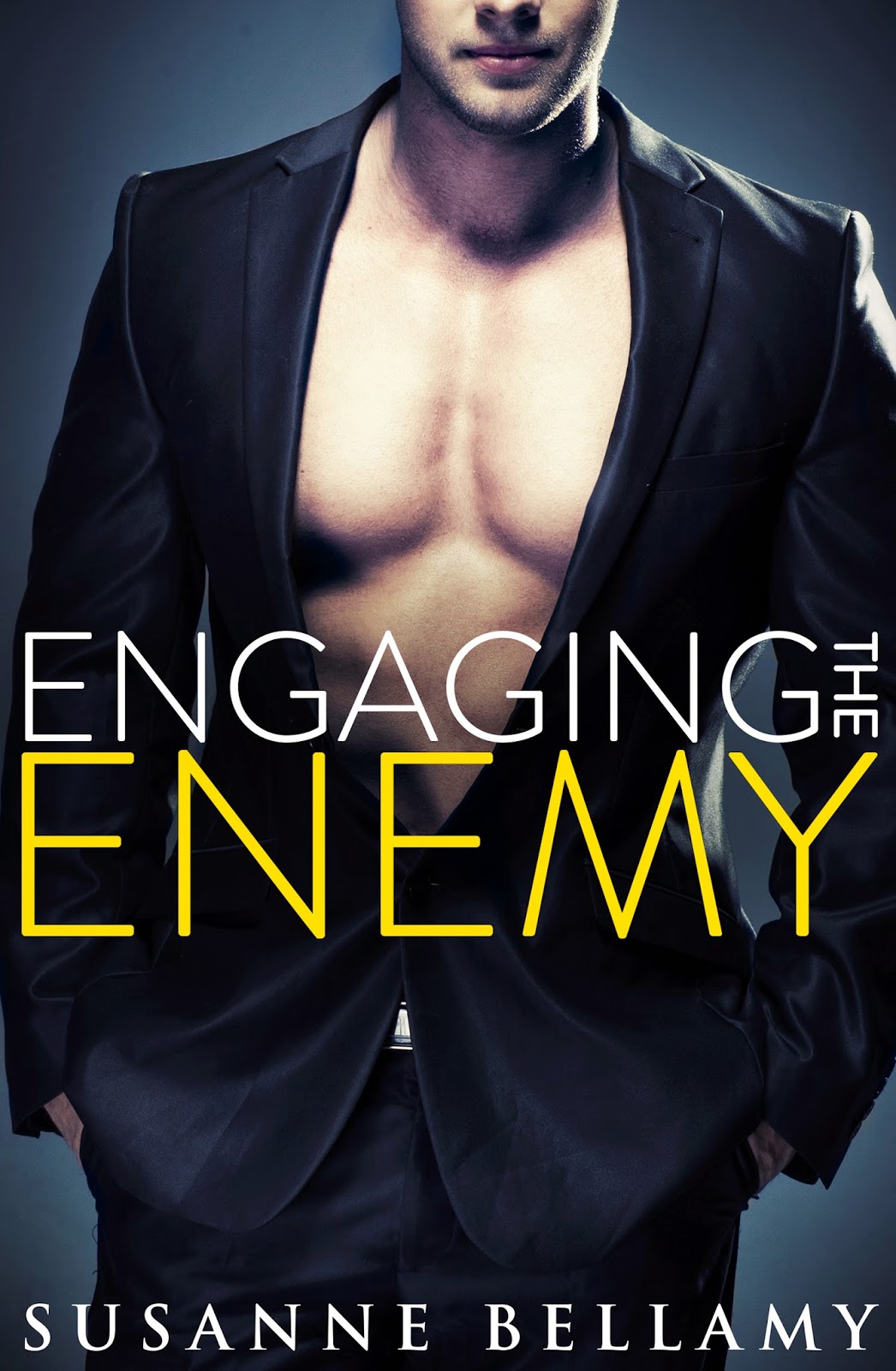 Another sensational release from Australian author, Susanne Bellamy, is Engaging the Enemy. If her first two books - White Ginger, and One Night in Sorrento - are anything to go by, this novel, set in Melbourne, will be a runaway success.

Susanne, thanks so much for visiting me, and congratulations on the release of Engaging the Enemy. Last time I interviewed you, we were eagerly awaiting news of this release. (Click here to read previous interview with Susanne). I must say, I love the cover for this book and can't wait to read it.

Q. Susanne, I’ve enjoyed reading your previous books very much. I love exotic settings away from the every day. Yet here, in Engaging the Enemy, we have Melbourne as the setting for this charming story. What was the catalyst for choosing Melbourne?

Cities that care about their heritage and have made positive moves to protect buildings and byways have a different vibe. After walking along Swansdown Street from the Yarra River up to the university and exploring its ivy-covered buildings, we were returning to our hotel on a city tram. My head was full of these beautiful buildings and all things heritage when I spotted the abandoned building that inspired this book. What can I say? It felt right.

Q. Melbourne – sassy, sophisticated, cultured – rivals any city in the world for style and class. Is there something in how you have depicted this great city in Engaging the Enemy that means the story could not have been set in a comparable city, such as London or New York? 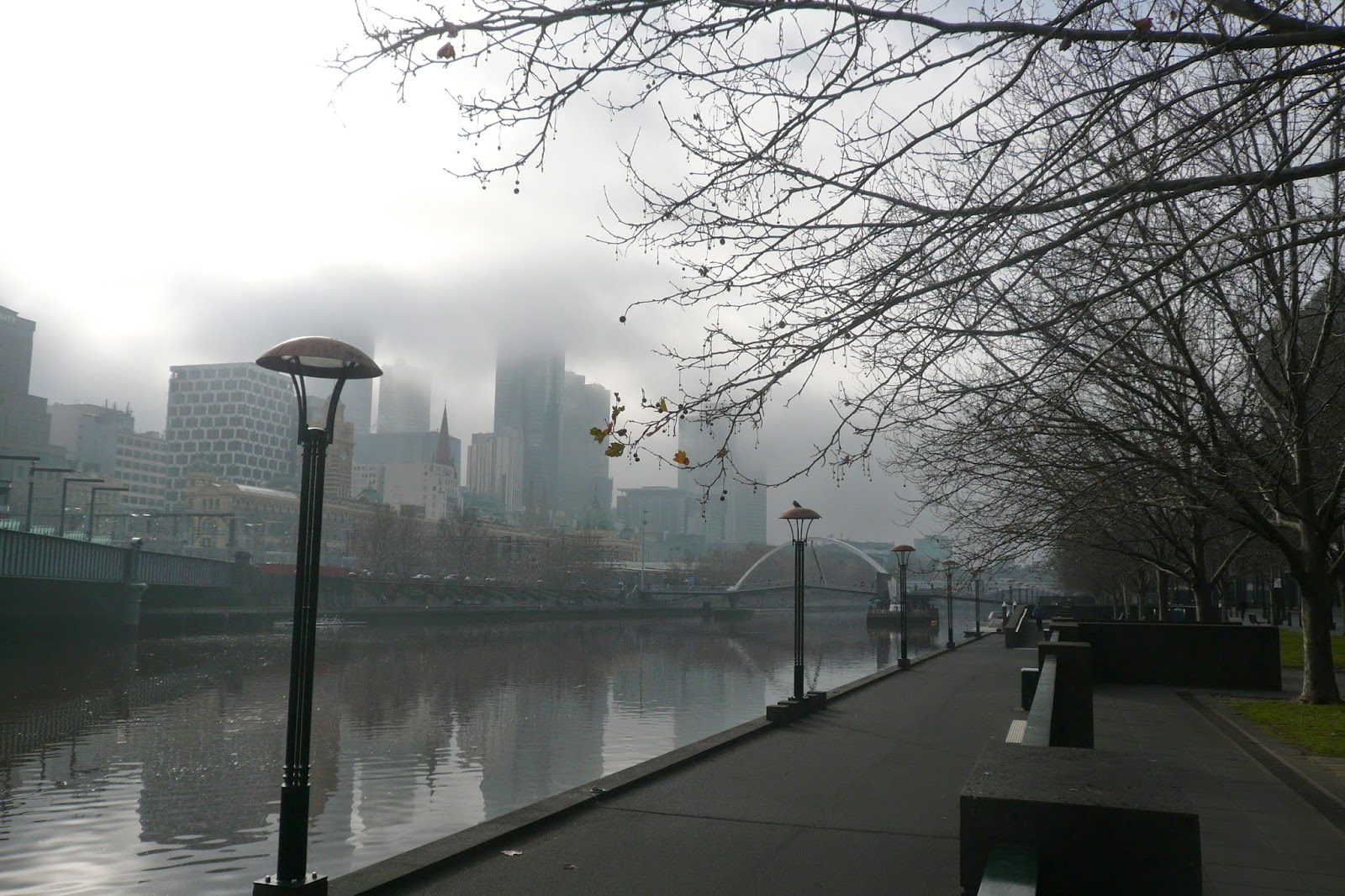 Cosmopolitan but with an elegant charm and one of our oldest cities, Melbourne has the history and the heritage attitude I needed to make this story work. It’s quite different from other Australian cities (though part of Adelaide could possibly substitute) and the atmosphere is not replicated in any overseas city I’ve visited. I needed an Australian city because of the story behind the building’s ownership and also a city in which preservation of buildings with sufficient age is well-catered for in council laws. I don’t believe it would be the same story in a different location. I’m not saying that many other cities don’t protect their heritage. They do, but Melbourne provided the confluence of elements my story needed. 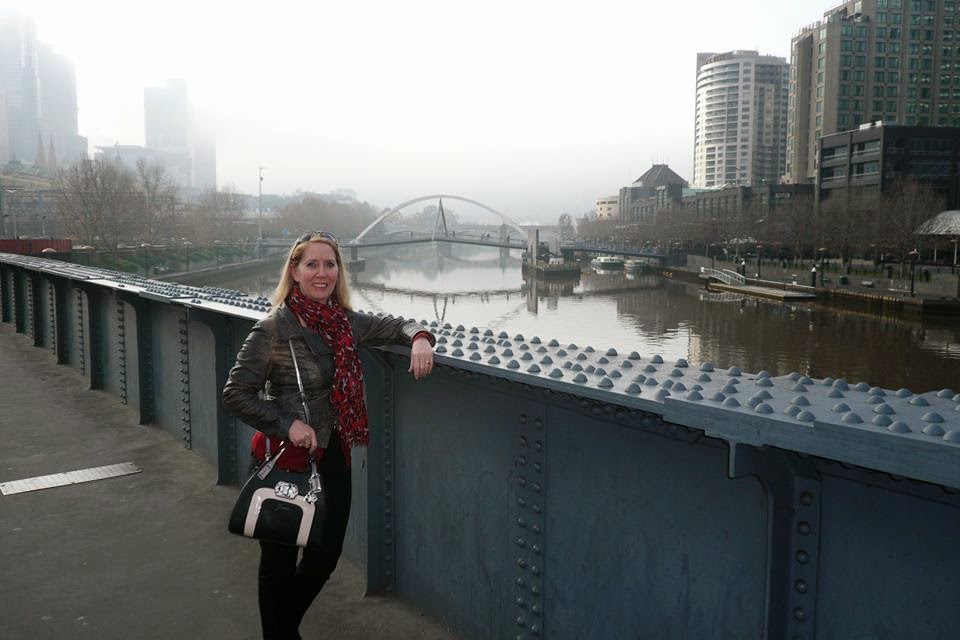 Q. Andie, your heroine, sounds like a determined yet warm-hearted girl. Do you share Andie’s social conscience regarding her resolve to provide a safe haven for women and families in need?

I do, and I have the greatest admiration for those who work in this area. Australia has had a decent record in the area of caring for those who are vulnerable, although our current political climate is less reassuring; too many social justice programmes are under threat with the present government. I wanted a heroine who wanted to make a difference to the lives of those who, through no fault of their own, are in difficulty and cannot cope with the hand fate has dealt them.

Needless to say, she doesn’t know the hero shares her values. At least, not for a while! ;)

Q. How does Andie cope with the dichotomy of, on one hand, a very honourable and self-less ambition; and on the other, a web of deceit?

Great question! Andie hates lies and can’t tell a lie to save herself. This places her in the occasional humorous situation as she attempts to be what she thinks she isn’t which lies at the heart of her dilemma. She is confronted by the need to tell what seems a lesser lie in order to save the building for the families depending on her and her friend, Lexie. She questions what she is doing and the need for deceit causes her more than a moment of angst.

Q. Can you please tell us five things you love about the city of Melbourne?

Q. Do Amelie (from White Ginger), Rhiannon (from One Night in Sorrento), and Andie – your latest heroine in Engaging the Enemy - have anything in common?

Each of them is an intelligent and independent woman though in different areas; Amelie is artistic and works as a fabric designer; Rhiannon is an engineer who has worked with her step-father to build a revolutionary engine; Andie is creative, (especially when it comes to hare-brained ideas!) but stubborn in asking for help. Mind you, she can fix almost anything and has a set of tools that would tear the heart out of most men.

They share certain attitudes and values; honesty, integrity, loyalty and family. And the ability to find the most gorgeous men! I haven’t yet created a heroine in need of redemption but that’s not to say I won’t further down the track.

Q. I have to say, I love the cover of Engaging the Enemy. Is it how you envisaged?

I do love its simplicity and clean lines for a start, and the colour choice. Originally I expected to see a watermark of an old building in the background since the central conflict is around ownership/possession of the building. But I love the tux over the bare chest look; it relates to a scene in chapter one!

Q. Similarly, the title is stunning. I love a little bit of alliteration. It’s catchy, unforgettable, and enticing. How many iterations did this title go through to get to this one?

At least four. As a work-in-progress, it was “Merger in Melbourne”; I love alliteration too! The suggestion to make it ‘higher concept’ led to the first name change, “Besting the CEO” which was changed by my publisher to “Betting on the Boss”. For a short time, this was going to be its published title but my wonderful editor didn’t feel it captured the essence of the story and came up with “Engaging the Enemy”. It’s the best of all and is clever on several levels! I’d love to know what readers think!

Q. And now something about you. Now that your latest book is out there, what are you currently working on? 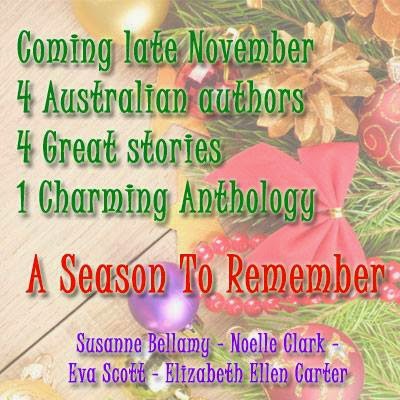 Three southeast Queensland author friends and I are working on a Christmas anthology titled A Season to
Remember. Four novellas set in Christmases past, present and future... I decided to expand my horizons and write a story of Christmas in 2525 AD when the fate of Earth hangs in the balance. Look out for that in late November!

I am also one-fifth of a romantic suspense series, Emerald Quest, about a two hundred year quest for a fabulous emerald and diamond necklace that moves through New Orleans, Britain and Hawaii. I loved writing this for many reasons, not least of which was that I got the chance to revisit Hawaii but in 1960, just after statehood.

And I’m working on the first book in my own romantic suspense series. Her Mountain Man (working title) is the story of Dr Marcy Westwood and her research into an aphrodisiac in a remote part of Nepal. Needless to say, her hero is the mountain man! 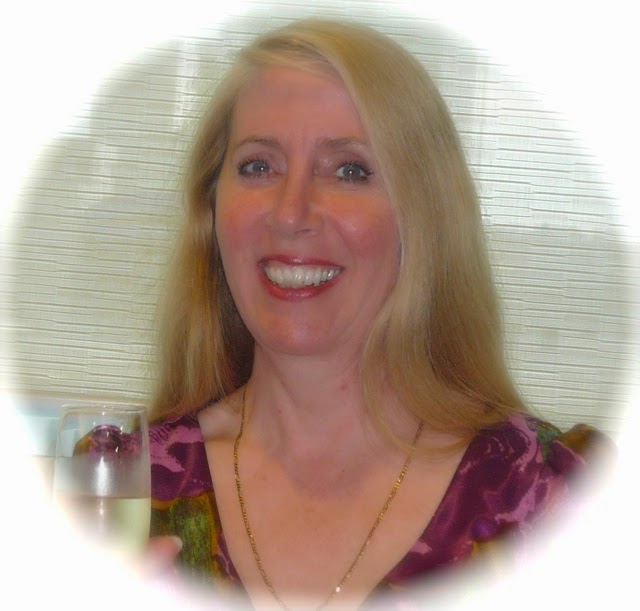 Q. You hail from the beautiful garden city of Toowoomba, high up on the range west of Brisbane in Queensland. Can you ever see a time when you will set one of your stories in Toowoomba?

A little too close to home! Besides, what excuse do I have for my next trip overseas if I set a novel at home!

Q. When you’re not writing, how do you like to spend your time?

Travelling, reading, talking, including to our dog. Seriously, she has an amazing range of vocalisations! We also have a beautiful garden that entices me outdoors but sadly, I’m not the green thumb of our family. I can kill plants with too much kindness! I love scrapbooking and dabble in crafts from knitting and cross stitch to making my own necklaces. Obviously I don’t have enough creative outlets!

I’m currently on long service leave from my full time job as a high school teacher and loving the chance to write every day. I could get used to this life!

Thanks for hosting me, Noelle. I’ve loved being here.

One building, two would-be owners and a family feud that spans several generations: all relationships have their problems.

Andrea de Villiers can’t lie to save herself. But when developer, Matt Mahoney, buys the building she and a friend have established as a safe house in the Melbourne CBD, she decides that protecting The Shelter is more important than her aching heart. She will confront Mr Mahoney, and she will emerge victorious. There are no other options.
But Matt has other plans for Andie, and she soon finds herself ensnared in a web of well-meaning lies and benevolent deceit. To protect the building and the families that depend on her, Andie agrees to play the part of Matt’s fiancée, and play it convincingly.
But lies soon bleed into truth, and what was once a deception starts to feel all too real. Can Andie accomplish her goals and protect The Shelter, without losing her heart to the charming Irish developer?

I love travel—new places, new faces, different cultures and endless possibilities. I’ve cruised from Australia to Britain and back through the Suez Canal when I was a child, trekked in Nepal and Vietnam, lived briefly in Noumea, visited western Europe and west coast America among other places. Let me repeat—I love travel! And history.

People’s stories fascinate me. Past and present lives and relationships and the mysterious ways Fate works. Even how I met my husband—Fate. Wonderful and mysterious.

And so my stories explore people engaging with the mate that Fate created for them. And the wonderful and mysterious ways in which they meet. I should probably thank the flat-mate who locked me out of my new house years ago which led directly to meeting my husband. But that’s another story! 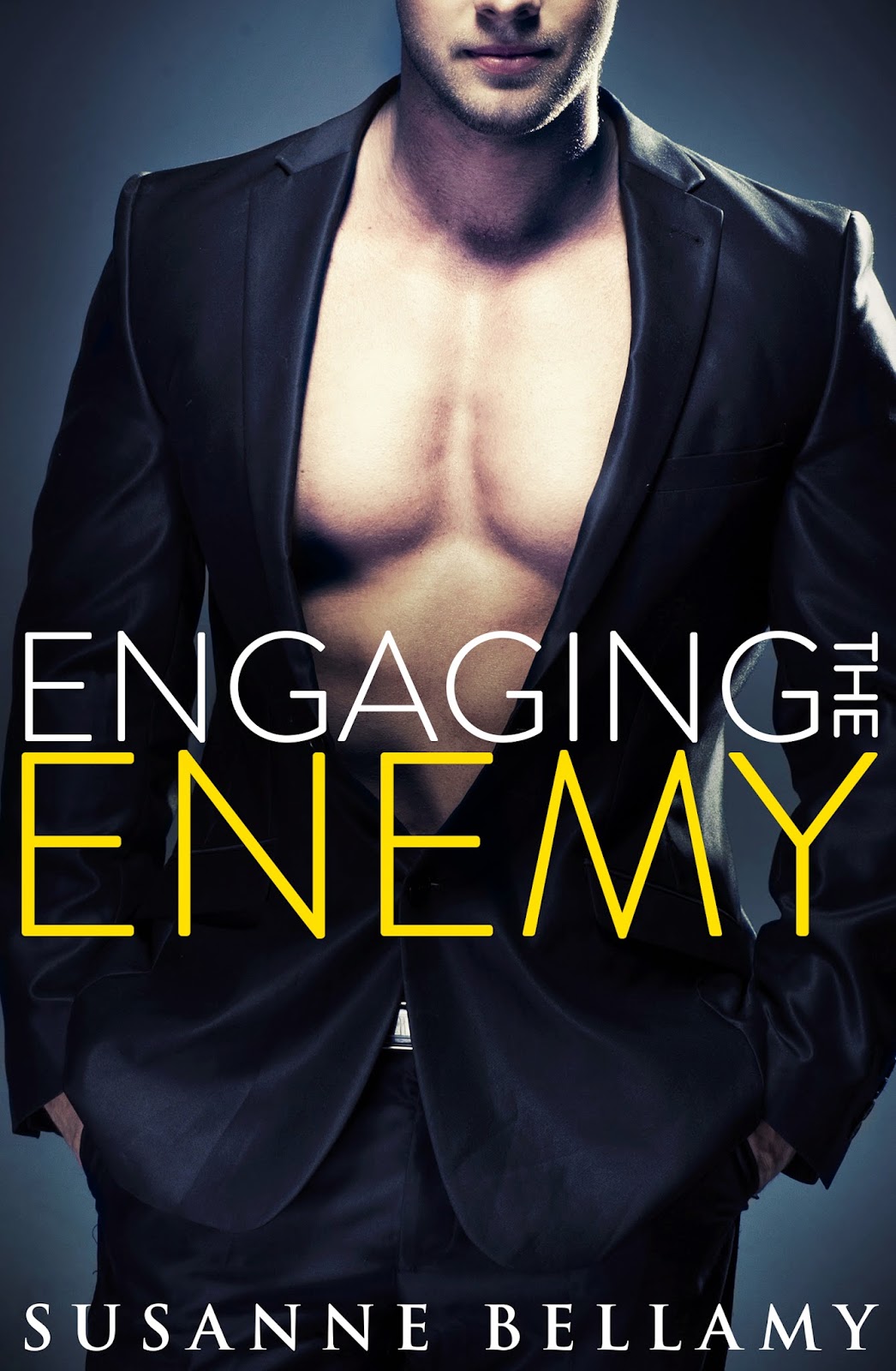