A day in the life of: Author Shehanne Moore 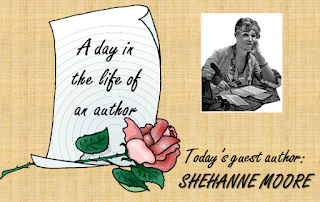 Our travels around the world are proving to be a wonderful way to unite friends from different countries, who share a common love of storytelling. Today, we stay in the northern hemisphere, visiting the beautiful city of , – famous for many things, including having built the ship RRS Discovery for Captain Scott and his famous Antarctic Expedition.


At the mouth of the , where it borders on the , lives Shehanne Moore, author of the hugely popular historical romance novel, ‘The Unraveling of Lady Fury’. So today, as part of the series ‘A Day in the Life of…’ we ask Shehanne to share with us a typical writing day. We hope she’ll share with us the secrets to writing her gritty, witty, as much risky as risqué, historical romance, set wherever takes her fancy. Stories that detail the best and worst of human behaviour, as opposed to pouts and flounces. I’m interested in finding out what inspires Shehanne, what kind of writing regimen she keeps, and where she does the hard work of putting pen to paper, so to speak.
Noelle:Shehanne, welcome to my blog. We’re no strangers, that’s for sure, but we live on opposite sides of the world. I wonder if you can tell us what a typical writing day might be for you. Do you slog away for x number of hours, without interruption? What’s your writing routine?
Shehanne : Firstly Noelle, thank you for inviting me onto your blog. I’ve been a fan since your fab book, Let Angels Fly, was  released, so to be here on your blog is something else. One of the nicest things about being a writer is the friends you make despite living oceans apart. So your first question, how I get fingertips to keypad is a miracle. Here is my study. Nice on the surface, but the door doesn’t shut, short of sawing the top off. The lintel is squint. Then there’s the view.
﻿﻿﻿﻿﻿﻿﻿﻿
﻿

Despite both, on a good day when I am actually barging on with a new book as opposed to pantsing about with editing and promo, I aim to get a thousand words down. That’s after dealing with the emails, short Facebook post, tweets and whatever blog stuff. Yes, as you will know that is hectic.

Noelle: Do you plot your stories out from start to finish, then tackle the research? Or are you a pantster, and just start writing as it flows?
Shehanne. Oh, if only I could plot. No, I only ever start with a flash. With Lady Fury I saw her on the landing, very ornate house, abroad, and she needs an heir but her husband can’t oblige. I never ever have a clue beyond that first flash. I liken it to getting on the tightrope next, as I try and write the first chapter--talk about leap of faith. Then, as that starts going down on the page in ways I’ve run screaming from,  I slink off to check some basic facts and see if this flight of fancy is possible. For example, there was something at the back of my mind about the privateers in the war of 1812 being hunted down afterwards and that fitted well with . So then, at the point the book opens I’m seeing a man down on his luck and desperate, yet a man who once was top of his game. It let me get another step on the tightrope.
Noelle: What in your environment inspires you, or allows the muse to take hold and weave her magic?
Shehanne: Environment is very important to me. Big confession, I have never been to but having been elsewhere I love the whole Med atmosphere. The warmth, the clarity of light, the scents of citrus, olive and pine, even the noisy crickets. Obviously romance writing means the focus isn’t on that but to me it very important to capture the essence.  My forthcoming book, His Judas Bride, was inspired by Glencoe, which is often considered one of the most beautiful places in . I spend a lot of time there on hills. The landscape has a sort of grim grandeur and then there is the history of the massacre. I liked the idea of a small clan, an impregnable glen, much as it was at the time the massacre took place. You know, my first sort of proper effort, pen to paper at the age of 13, was about the massacre. Lol. His Judas Bride is set there but I have changed the name. While it’s not about the massacre I am using the idea of a small clan, untouchable, because the glen is impregnable. So, much of Glencoe appears in the book, from the Devil’s Staircase to the Hidden Valley.
﻿﻿

Noelle: That is a stunning photo. What a beautiful place Glencoe is. You sound like an adventurous person and I can see why you love climing 'hills'. But, given that you live near the sea, do you enjoy sailing on the high seas, dreaming of gorgeous pirate captains like Flint?
Shehanne: If only! I can’t actually swim, so I really should be a damn sight more careful of all these fast flowing rivers I routinely find myself in! Of course produced its own pirate. Captain William Kydd. I don’t know he was very gorgeous. He looks a bit of a chancer really.
Noelle: Hmm, I agree. The character, Lady Fury, has proven to be hugely popular and well known. She has a voice of her own, and has become quite a part of the lives of all who enjoy reading her blogs. How much of Shehanne Moore is in Lady Fury?
Shehanne: I believe Mr Shey once said –it was on the subject of the time I served broccoli soup on the steak thinking it was mushy peas…. ‘Shey shares a docility in common with her heroines, therefore I said nothing.’ has a proud tradition of ‘undocile’ women stemming back to when they, not their menfolk, kept the family. My own grandmother wasn’t terribly docile either. She routinely had the police at the door for stotting teapots off of neighbours’ heads. Her hubby’s too. I just amn’t good at creating ladylike heroines.  Like Fury, I will try and keep my temper but if I lose it…
Noelle: (OK, I'll remember never to upset you.) Given the global nature, and popularity, of Lady Fury, could there quite possibly be a sequel to ‘The Unraveling of Lady Fury’?
Shehanne : Heavens? Gosh. Who knows if I get a flash!
﻿
﻿

﻿
Noelle: You have a new book coming out soon with Etopia Press – ‘His Judas Bride’. Without giving away any secrets, are you able to tell us a little about the book?
Shehanne : Okay, it’s about how far you’d go to get what you want most. Kara, the heroine, pretty well believes she’s invincible. To say life has treated her horrendously is an understatement and she wants something very precious back badly. Things backfire and it brings her into a direct clash with the one man who will stop her, Callm McDunnagh, the Black Wolf of Lochalpin. Not because he’s the most ruthless man in the , because he reminds her she’s a woman.
Noelle: I can’t wait to read a book set in Scotland, written by someone who obviously loves the hills and mountains as much as you do. This book must be dear to your heart?

Shehanne : I wrote this book before Lady Fury but there were aspects of Kara’s past I knew would make it a hard sell. I know I don’t fit quite the traditional mould, so I was over the moon to sell Fury. But being a very suspicious person by nature, I wanted to see that Etopia didn’t soften my story, that I could trust them with Callm and Kara’s—provided they were interested of course-- because the book and Kara and the Wolf are dear to me in many ways.

Noelle: Shey, thanks so much for coming to visit us here, and for sharing so much of yourself. I love those pictures of Glencoe, and can see why you spend every available weekend up there in the 'hills'. Your next book, His Judas Bride, set in such an inspiring and beautiful location, is sure to be wonderful. Thanks so much. x
Finally, where can readers connect with you – and Milady Fury – and where can they buy your books?
Shehanne : Connect? Ooh, generally up a hill but sometimes here.

Shehanne's book, 'The Unraveling of Lady Fury' is available here

BLURB of The Unraveling of Lady Fury 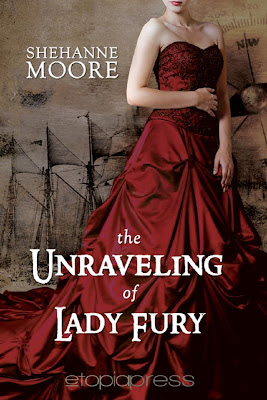 Rule One: There will be no kissing. Rule two: You will be fully clothed at all times…

Widowed Lady Fury Shelton hasn’t lost everything—yet. As long as she produces the heir to the dukedom, she just might be able to keep her position. And her secrets. But when the callously irresistible Captain James “Flint” Blackmoore sails back into her life, Lady Fury panics. She must find a way to protect herself—and her future—from the man she’d rather see rotting in hell than sleeping in her bed. If she must bed him to keep her secrets, so be it. But she doesn’t have to like it. A set of firm rules for the bedroom will ensure that nothing goes awry. Because above all else, she must stop herself from wanting the one thing that can never give her. His heart.

Ex-privateer Flint Blackmoore has never been good at following the rules. Now, once again embroiled in a situation with the aptly named Lady Fury, he has no idea why he doesn’t simply do the wise thing and walk away. He knows he’s playing with fire, and that getting involved with her again is more dangerous than anything on the high seas. But he can’t understand why she’s so determined to hate him. He isn’t sure if the secret she keeps will make things harder—or easier—for him, but as the battle in the bedroom heats up, he knows at least one thing. Those silly rules of hers will have to go…

Noelle: Now, my post would not be complete without a map showing where my guests come from. 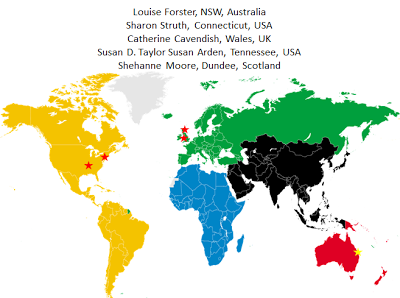