Little Red Gem ... and a song from the heart. Meet author D.L. Richardson

I’d like to extend a very warm welcome to fellow Australian author, D.L. Richardson. Deb’s next book, Little Red Gem, is set for release on October 25th, and I can tell you that this will be one book that will capture the hearts of many readers. Deborah’s previous books are The Bird With the Broken Wing, and Feedback – both out through Etopia Press. Deb’s YA books are proving very popular, and have recently achieved #1 and #2 in Teen Novels in OmniLit’s Best Sellers list. Very impressive! 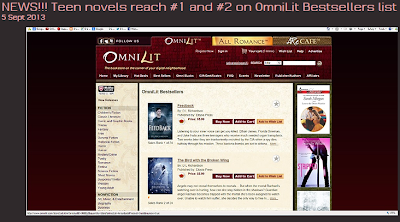 
Thanks for having me on your blog, Noelle. For those who don’t know me, I write speculative fiction. This is my third YA novel and my first paranormal romance. Little Red Gem was so much fun to write. It began many years ago as a story about two girls named Ruby and Audrey who swapped bodies when they died, and along the way it evolved into a teenage paranormal love story. I wanted to write the ultimate romance, so for me that meant I had to include one of my passions - music. I loved the character names and retained them, though nothing else of the original story ended up in Little Red Gem.


Why was this so much fun to write? Well, I made the main character, Ruby, a singer in an all-girl band and the love of her life, Leo, is also a musician. As a teenager I sang in the school choir and rock band and I performed in school plays. My boyfriend at the time was also a guitarist. I had an acoustic guitar but I wasn’t great on it and I loved piano but again, not that great. I was a singer, not a musician but I play for enjoyment so it never bothered me. Anyway, when I left school my boyfriend and I started a band where I was the vocalist, but after a few rehearsals I decided to buy a bass guitar, because every band needs a bass guitarist. Suzi Quatro was an icon of mine. I was pleased when I realized I was actually good on the bass guitar, though I sold all my equipment after 10 years when I decided I wanted to write novels. I wish I hadn’t been so impulsive that I just sold everything. But I’m an impulsive kind of person, sometimes.


Back to the story. To be able to delve back into the world of music was a real treat for me as an author. Usually I’m researching worlds or creating them instead of re-living them. Here is an extract featuring one of the songs from the book. It’s called Side Of The Road. And as a special treat, I have recorded this song and included it on the trailer. Be sure to check it out, though it isn’t professionally recorded so I apologize in advance for the less than excellent quality. I hope you like it.


I shook off the gloom, and forced cheerfulness into my voice, telling myself I should stay positive for Anne’s and William’s sake. After all, I was merely dead – they were dead and cursed.


“Okay, you’ve convinced me a song from this century is in order. I’ll sing for you, on the condition you continue with the story of how you and William met your fate.”


I closed my eyes as if sorting through my mental library and all I saw was the image of Mom’s Jeep careening over the embankment. I choose to sing a tragic ballad:


After I’d finished, my cheeks felt warm and I figured, throughout the night I’d swiped at the tears, now I should let them cascade like a river. If they ran for long enough maybe they’d wear down through my flesh and bone to form a crater-like dam, which would come in handy; I doubted the tears would ever stop and I’d need somewhere to store them.


The wind outside rattled the shutters and I opened my eyes, hoping to view a different day and feeling horrendously let down when I didn’t.


“Such a sad song,” Anne whispered. “Yet…beautiful at the same time.”


“Thanks,” I said. “I got an A+ in music. Teacher said I must be a reincarnation of John Lennon.”


Anne tilted her head. “Oh. You did not write that song about your own demise?”


“No. Leo and I were driving into Prospect, and on our way home the car hit an oily patch on the road. We skidded. The car did a complete three-sixty. Thankfully we didn’t crash into the oncoming cars, but we did end up off the side of the road. We pulled over to let our heartbeats return to normal, and there, staked into the ground was a wooden cross with a bunch of flowers tied to it.”


Anne’s eyes lit up. “How intriguing.”


“It gets more so. There was a newspaper clipping pinned to the cross. A young woman’s car had run off the run and crashed into a tree. She’d died. The flowers were from her lover.”


“This is turning into a tragedy.”


“Agreed. But in a way it’s also a very romantic story. The crash happened ten years ago and the newspaper clipping said the lover vowed to return every year on the anniversary of her death to replace the flowers. And every year he’s returned, not only has he replaced the floral arrangement he’s also carved the date into the cross. How’s that for true love?”


No sooner had the words left my mouth than an agonizing grief rammed into my chest. My throat unlatched and a sob escaped. “Oh Leo, I’m sorry I died.”


Anne rushed over to my side and embraced me. We curled up on the couch, pressed up against each other, and throughout the night my tears flowed. They continued until light seeped in through the cracks.


I had survived my first twenty-four hours as a ghost.


About the songs in this book


With the exception of Amazing Grace, all the words to the songs in this book are written by the author. Side Of The Road, the song Ruby sings to the ghosts when she first meets them, is the only song not written specifically for this book. It was written in 1991 and was inspired in a similar way to which Ruby was inspired to write the song. A Million Miles, the song Ruby performs at the Reach For The Stars audition was written for this book and has musical accompaniment, unlike the rest of the songs which are just lyrics and have yet to have music put to the words. 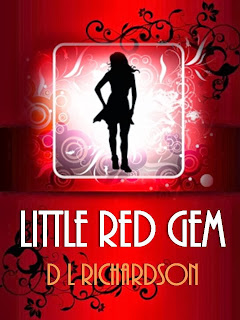 Book Description:
Love can make you do crazy things as Ruby Parker discovers when she dies and returns from the grave to unearth how much Leo Culver loved her. With the aid of bad advice from a ghost who is trapped by a curse, a little bit of magic courtesy of her unsuspecting half-sister, and a televised music talent show coming to town to hold auditions, Ruby Parker makes more of a mess in death than she ever did in life. Can she fix everything before it’s too late? Or will she spend eternity as a ghost, haunted by the unknown depths of love? Either way, one thing Ruby learns is that while love can make you do crazy things, it can make you do amazing things too. But at what cost?

Available at all good online retailers such as:
Buy eBook

More online retailers to come…
Other links:
Goodreads    https://www.goodreads.com/book/show/18525150-little-red-gem
Bonus material!!!
Here is a unique book trailer. Listen to D L Richardson as she performs one of the songs featured in the novel. I apologize in advance for the quality. I haven’t performed live in over 10 years. I’m a little rusty.
﻿


Listen to D L Richardson as she performs a second song featured in the novel.
Coming for Christmas - Bonus novellas. What happened to Audrey while she was trapped in the underworld? More of the story behind the two ghosts, Anne and William

"One lucky reader who comments on my blog post will be randomly selected to win an ebook copy of Little Red Gem. Good luck!"